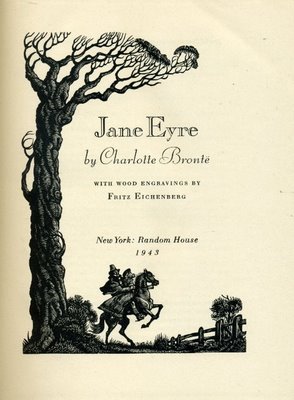 Episode #30 - Jane Eyre by Charlotte Bronte. Julie thought Jane was right in asking Rochester about whether or not he loves another, while Scott thinks Jane needed to be a little more concerned about the dark goings-on.

Rose's email on YA Lit and Heroines (included by request)

6 Traits of a YA Dystopian/Fantasy Female Protagonist
These traits are obviously meant to define her as a Woman of Action, a strong, independent female protagonist who is worthy of admiration. However, the one trait relied on to make her strong is her physical skill and possibly leadership. An absence of these traits leads to a character who, like Bella in the Twilight series, is criticized as being weak and passive. While this simplistic view of strength is likely to appeal to the girls it is written for, these types of novels have a much wider audience and reflects the general rejection of the Domestic Goddess image that dominated literature for centuries.

The Domestic Goddess is stereotypically a weak, passive woman who waits for a man to save her and while there are numerous examples of this, there are many noticeable exceptions. Penelope, the archetypal Domestic Goddess from The Odyssey, demonstrates amazing strength of will in her determination to avoid a second marriage and wait for her husband to return, putting herself in danger not just from one, but a whole gaggle of men, every night as she unravels her dress, a traditionally female craft. This internal, feminine strength extends to female protagonists throughout literature including Jane Eyre, Fanny Price from Mansfield Park, Dorothea from Middlemarch, and Hester Pryne from The Scarlett Letter. They display a strength, both emotional and mental, that surpasses the Dystopian Protagonist’s physical strength becomes it comes with more conviction and purpose. These women do not need the false modesty of the Dystopian Protagonist because they have a true self-knowledge of their strengths and weaknesses that gives them the strength and maturity to affect their society in a constructive way and serve as an example to others.

So has the modern woman really lost her true strength to this pale imitation of masculine heroics? Are there any truly original, realistic women in YA Dystopian/Fantasy novels today or has the future really lost the wisdom of the past?